House Bill 910 (“HB 910”) became effective January 1, 2016.  The previous licensing structure permitted individuals to carry a concealed handgun under certain circumstances.  HB 910 amends the Alcoholic Beverage Code, Code of Criminal Procedure, Education Code, Election Code, Family Code, Government Code, Health and Safety Code, Labor Code, Local Government Code, Occupations Code, Parks and Wildlife Code, and Penal Code to authorize a person who is licensed to carry a concealed handgun to also openly carry a holstered handgun.  In addition, HB 910 decreases the penalty for a license holder trespassing with a concealed handgun to a Class C misdemeanor and similarly creates a Class C misdemeanor offense for a license holder trespassing with an openly carried handgun.  However, the penalty for a trespassing offense is increased to a Class A misdemeanor if the trespasser ignores verbal notice that the person may not enter or remain on the property with a handgun.

Here are some important facts to know: 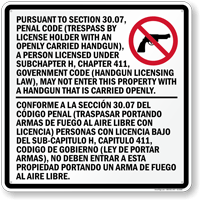 By The Strong Firm P.C. | Published January 5, 2016 | Posted in Uncategorized